A PIC 16F876 microcontroller and an a game contoller stick are used to implement an IR remote control including a GKOS keyboard and pointer control. It can send GKOS chord value IR packets as well as mouse movement/button state IR data packets to be received and used in several types of applications. This version also has a SLEEP function so that no power switch is required. Also, there is no need for a power source regulator. 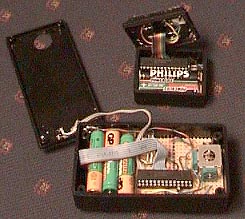 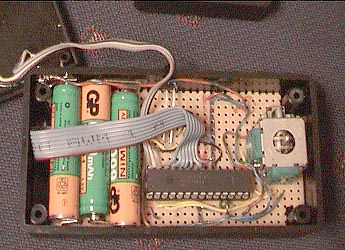 Files gkir3s.hex and ggir19s.hex are the latest fully functional software packages for PIC 16F876 including GKOS keyboard operation and the mouse functions (ggir19s.hex only) as well as the SLEEP function so that no on/off switch or power regulation is needed.

ggir19s.hex can send GKOS keyboard data as well as pointer control data, and can also be used without the mouse if Y and X inputs (pins 2 and 3) are connected to ground (DO NOT ground pin 12 or 14 !). A suitable control stick can be taken out of a low cost PlayStation game controller (e.g. NET PERFECT Double Vibration, 9 dollars/euros, has two of them inside). While waking up the device from SLEEP, do not touch the pointer control stick because its position at power up will be used as the idle value.

File gkir3s.hex is a package without functions for a separate mouse, but the pointer can be controlled by the keys after pressing SHIFT 123-ABC. It includes the SLEEP function as well.

If you use a 4 MHz resonator, no 33 pF capacitors are needed (those shown with remote 1). The resonator is so small it has been put under the PIC circuit to save space especially in the smaller remote control (matchbox size).

Flat micro switches are used as GKOS keys and mouse buttons. In the smaller remote, there are plastic plates (cut out of an old credit card) taped (2-sided adhesive) on keys A-D, B-E and C-F so that pressing in the middle of the plate causes the two micro switches to turn on (e.g. A and D).

The GKOS keypad must use keys that have a resistance well below 4 kilo ohms while being pressed, so typical rubber pad contacts (like those in most calculators) can also be used. See also the 'SixBack' implementation of the keypad.